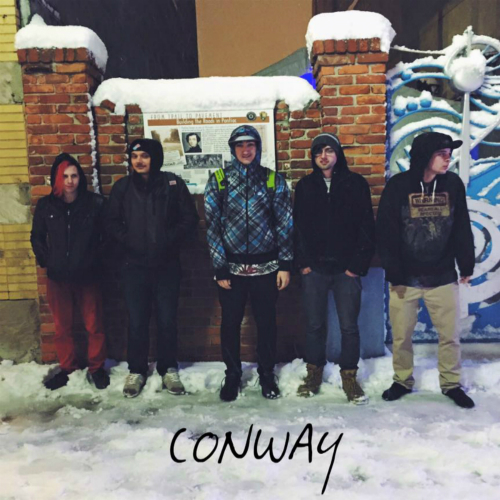 Quintet Conway (@conwayband) has paid their dues by touring across the U.S. in support of their unique take on pop-punk. Their most recent EP Open Your Eyes will get listeners’ attention as the Michigan five-piece demonstrate a great effort into recording it with its recurring main idea of relationships gone awry. This makes the band and their music more relatable to everyday people who can find solace knowing they are not alone in being broken.

The first tune ‘On Your Own’ is a song of love gone awry with splendid arrangements and spot-on vocals. It seems clear the band has spent some time listening to Simple Plan, A Day To Remember and The All-American Rejects for inspiration. It is an anthem that the heartbroken and neglected can relate to. The EP‘s longest track ‘All Wrong’ is another tune with the same imperfect relationship theme. Some of these songs will likely hit close to home with listeners who have experienced what the songwriter(s) have. It is often that the worst situations make the best stories.

Much like the previous two tunes, ‘Currents’ has surefire hit written all over it and maintains the album’s continuity of imperfect social situations. From start to finish, this track is their best chance at obtaining a Top 10 Alternative Chart hit off this record. Coming in at under two and one-quarter minutes, the finale ‘Meant To Seem’ is an ideal ending to the EP with solid musicianship on display and poignant lyrics such as, Sail away from the safe harbor / Catch trade winds to the east / Cause every part of me knows I should leave / But that’s not happening.

Open Your Eyes is a commendable effort from Conway as it cannot be easy to take dark subject matter and turn them into danceable, headbanging, songs. Although the lyrics are grim, the vocals and musicianship are on point and high energy from beginning to end. Another thing that is amazing is how they have managed to fly under the radar for so long. It is in every pop-punk fan’s best interest to pick up the EP and check the band out live. Their tour kicks off in Columbus, OH tomorrow, November 17 before they head back to their home state for a show and head west. Conway is in possession of four coping mechanisms for today’s depressed and confused youth and this EP along with their back catalog going unnoticed is a travesty.

Good Luck Year (@goodluckyear) is a Dayton, OH-based alternative rock sextet comprising of Matt Shetler, Justin Smith, Tesia Mallory, Jason Thompson, Josh Guild, and Cole Howell. Much like other rock outfits like Children 18:3 and Skillet, there is a hybrid of male and female vocals at play from Shetler and Mallory. On September 18, the group released their third record Tinder for the Fire and they have garnered praise in their hometown for it. Upon listening to the EP, there is no surprise why the outfit has a buzz about them. It is now time for the record and the band to reach a wider audience to show the masses what they are all about.

Tinder for the Fire starts off with a bang with ‘Temporary Light’, a track cocked and loaded with harmonic dual vocals that is Good Luck Year’s staple. The tune is a mishmash of what would happen if Hayley Williams teamed with Andrew McMahon. The result is a surefire Top 20 rock hit one can headbang to. Once a label gets their hands on this band, expect widespread attention off of this song alone.

Clocking in at 2:42, ‘Pinch’ is the shortest track of the five and the only downside of that is less of Tesia Mallory’s voice, which leads off the song. It is a departure from ‘Temporary Light’, but it displays to the listener that this six-piece is no one trick pony. The third track ‘Tie Tie’ has elements of Twenty-One Pilots, Panic! At The Disco, and Paramore mixed in leading to what would be another rock radio staple.

The group prides itself in being unique, which is important the current state of the industry. ‘Colors’ turns the intensity down several notches with acoustic guitar more at play than the previous three tunes. On their Facebook page, Good Luck Year mentions they have two keyboardists, which outside of Tennessee act sElf is uncommon. It gives the band more to play around with on this EP and future releases. Lastly, clocking in at exactly four minutes ‘Secret Science’ is the group’s best chance at a crossover pop hit. The pace is slowed even more than the previous tune with the emphasis on the dual vocals and acoustic guitars. Both singers show they have the chops to make this tune work.

Similar independent artists to Good Luck Year can also be found right in the state of Ohio. Cleveland’s Envoi with frontwoman Maddie Finn perform tunes in the same vein as Good Luck Year. Furthermore, Columbus’ Two Years Later with founding members Jamie Rogers and Zak Toth present a similar superb style of music. It is worth a pop-punk fan’s while to hunt down this EP, available at Bandcamp, iTunes, and Amazon. The band is looking to tour, thus bookers and fans who want them in their town need to take the initiative now before the group’s calendar fills up. It is safe to say with what they have displayed thus far, Good Luck Year will have very, very good luck for years to come.

Cincinnati’s Mint Leopard (@MintLeopardOG) consider themselves a psych-jazz rock n’ roll band and based on what they have released thus far, they live up to the hybrid description. Formed earlier this summer, the quartet of lead vocalist Jaxon Hughes, drummer Justin Van Wagenen, guitarist Alex Masset, and keyboardist Ben Bob Hammer have been getting their feet wet with live shows across their hometown and surrounding areas. They recently released the single “Progress in the Evenin’” and even created a music video for the track. Based on first impressions alone, the foursome should have a bright future ahead of them.

The video, directed by Hughes, was conceptualized and executed with sheer brilliance. Based on its premise and production, it would fit right in with the playlist of The Cool TV and MTV2’s 120 Minutes, when the latter network still aired the program. Released this past July, the video is primarily set in the desert, with three guys in business casual outfits searching for Hughes. The song is a melting pot of pop-rock psychedelic greatness that crosses over multiple decades. It would fit like a glove on playlists in the 1970s and 80s. With several acts in the 2000s inspired by music from 30 to 40 years ago, the track is just as relevant today as it would have been back then. Hughes’ harmonic vocals gel perfectly with the slick guitar and synthesizer work of Masset and Hammer. Van Wagenen’s drum work caps off “Progress in the Evenin’” giving the listener approximately four and a half minutes of a non-stop jam session.

Mint Leopard is seeking to expand its horizons beyond being their local territory and they are well on their way in doing so. The group looks to tackle Ohio’s capital, known for its diverse and embracing music scene. Cincinnati has produced good talent across different genres such as 98 Degrees, Pay The Girl, and Motherfolk. With upbeat on-your-feet tunes in their arsenal, Mint Leopard has an excellent chance to succeed anywhere.

Kerchief (@KerchiefMusic) is the moniker of ex-Vanity Theft guitarist/vocalist Brittany Hill. Given the blood, sweat, and tears put into her sophomore solo effort Machines and Animals, it is a safe bet Hill is going to be just fine on her own. Released earlier this summer and available at online retailers and live events, the 10-track album includes something for everyone who is a fan of the alternative music genre. Although it might be Hill’s second record and first full-length under this identity, given the output of this album it is clear she is no novice and will have a future in the music scene for years to come.

Machines and Animals from start to finish is a breath of fresh air and a throwback to an alternative scene longed for by fans of Luscious Jackson, Ani DiFranco, and Peter Searcy. The vast majority of tunes are radio-friendly in terms of their length, arrangements and catchy hooks. ‘Milk & Honey’ is the first single and gives off a Brandi Carlisle-ish vibe upon repeated listening of it. It is a song about the hustle to become successful, which is something that any working class member can relate to. The track has a video for it, which has nearly 13,000 views on YouTube alone. There are plans to shoot a video for the equally impressive ‘Jack London’, a track that will surely satisfy Vanity Theft fans.

Signed to non-major label 825 Records, Kerchief managed to show how talented she is without a huge budget behind her. She penned every single tune on the album and outside of minimal input from Matty Amendola (who co-directed the ‘Milk & Honey’ video), Hill played all of the instruments heard on Machines and Animals. This effort is fairly close to D.I.Y. as one can get keeping the costs low, but maintaining high quality. Unlike some one-person acts like The Saturday Giant and Happy Chichester, on tour Kerchief is a stripped down trio which again keeps expenses at a minimum but still allows Hill to rock out at live events.

Machines and Animals is a solid ride from top to bottom with the kind of variety that will keep listeners debating their personal favorites among each other. This could very well lead to word of mouth regarding the record, which is another way indie artists are being discovered every day. Some may embrace the storytelling behind the personal song ‘Weekend’ while others might prefer the perfect-for-radio ‘Out of Focus’.  For an independent musician, the more listeners the merrier and the more one listens to this LP, the more one will admire and respect what Kerchief has to offer the music consumer.

This WordPress.com site is the cat’s pajamas

A Good Blog is Hard to Find

To share my passion of motorsports to all my readers! To get people of all ages and income levels into the absolute best vehicle possible for their specific needs and to make driving enjoyable every single day!

Top 10 of Anything and Everything - The Fun Top Ten Blog

because anything is possible with Charisma

My great Wordpress blog
It's not my fault.

Merely everything of what exactly seen around the world; know the rope of history, race and religion, relationships and pace with the technology.

Chic Beyond Belief by Stephanie Rizik

blogging about my ordinary 20 years of existence